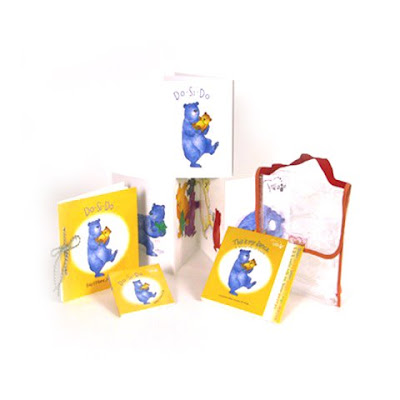 Do-Si-Do simulates a wonderfully unique experience of rhythm and movement. Movement highlights include a Virginia Reel, a combination Tango, Cha-Cha and a "move-to-it" poem.

This series of Kindermusik has completed. Kayden loves it and I do too! I have been "Bom ba ba, bom ba ba, tango-cha-cha. One two three, waltz with me. Bom ba ba ba....."

From Wikipedia, the free encyclopedia
Dosado (also written do-sa-do) or Dos-a-dos (also written dos a dos) or do-si-do (also written do si do) is a basic dance step in such dances as square dance, contra dance, polka, various historical dances, and some reels.
The term is a corruption of the original French term dos-à-dos for the dance move, which means "back to back", as opposed to "vis-à-vis" which means "face to face". It is probably the most well-known call in square dancing aside from, perhaps, the "Promenade" or the "Right and Left Grand".


=====
Age Range - newborn to 18 months.
Semester - 8 units, each 8 weeks
Class Length - 45 minutes
Focus: Nurture the bond between parent and child.
Curriculum Content: Village engages all of your baby's senses through a unique blend of multi-level activities which include creative movement, vocal play, object and instrument exploration, and reading literature books, which aid the baby's visual tracking and language development.