Einstein Never Used Flash Cards: How Our Children Really Learn-- And Why They Need to Play More and Memorize Less (Kindle Edition)

I need this book to learn about a child's development. I might be using the wrong approach?? Gee....

Going to Borders or Kinokuniya next week.... 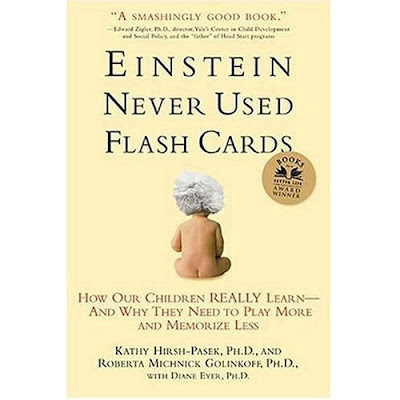 Einstein Never Used Flash Cards: How Our Children Really Learn-- And Why They Need to Play More and Memorize Less by Kathy Hirsh-Pasek

Editorial Reviews
From Publishers Weekly
Authors and child psychologists Hirsh-Pasek, Golinkoff and Eyer join together to prove that training preschoolers with flash cards and attempting to hurry intellectual development doesn't pay off. In fact, the authors claim, kids who are pressured early on to join the academic rat race don't fair any better than children who are allowed to take their time. Alarmed by the current trend toward creating baby Einsteins, Hirsh-Pasek and Golinkoff urge parents to step back and practice the "Three R's: Reflect, Resist, and Recenter." Instead of pushing preschoolers into academically oriented programs that focus on early achievement, they suggest that children learn best through simple playtime, which enhances problem solving skills, attention span, social development and creativity. "Play is to early childhood as gas is to a car," say Hirsh-Pasek and Golinkoff, explaining that reciting and memorizing will produce "trained seals" rather than creative thinkers. Creativity and independent thinking, they argue, are true 21st-century skills; IQ and other test scores provide a narrow view of intelligence. The authors walk parents through much of the recent research on the way children learn, debunking such myths as the Mozart effect, and pointing out that much learning unravels naturally, programmed through centuries of evolution. Although the research-laden text is sometimes dense, parents will find a valuable message if they stick with the program, ultimately relieving themselves and their offspring of stress and creating a more balanced life.
Copyright 2003 Reed Business Information, Inc.

John T. Bruer, PH.D., President of The James S. McDonnell Foundation and author of The Myth Of The First Three Years
"An elegant summary of what mind and brain science can tell us about child development and learning . . ."

Encourage learning through play, and you don't even need expensive toys or gadgets for play. You can use every day items for baby to touch, grab and chew on! Make noise, point out sounds and colour in nature, sing, laugh.... Babies learn best with stimulation. We can only introduce the concept of reading and hope that they develop a thirst for gaining knowledge through reading. In the end, I would rather my children experience life in doing rather than just reading or seeing.